This made me smile… 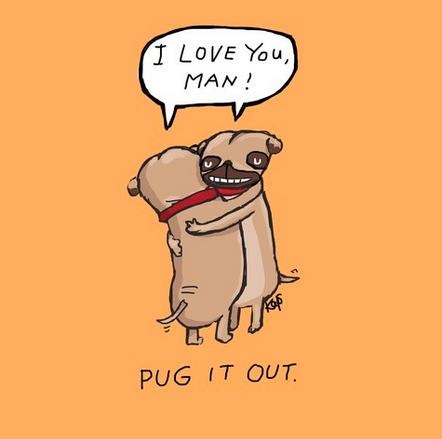 Thought this was so cute…

Visitors to Waikiki Beach may do a double take at the four-legged surfer boarding in to shore, but the regulars don’t blink. They know the eight-year-old pug is Bugsy, a local legend whose owner, David Yew, taught the dude, er, dog to surf.

Yew, 39, got the notion while he and Bugsy were out walking on the beach and came upon a statue of a surfer. Yew plunked the dog down on the surfboard to take a photo, and the scene looked so natural that Yew was inspired to take the next step. Soon enough, the two were tandem surfing.

“The first time we paddled out,” Yew says, “Bugsy ran right to the front of the board to hang ten.” (That’s eight, really—dogs have four toes per paw.)

The duo ride an 11-foot, rubber-padded longboard. “It gives Bugsy a better grip,” Yew says. Not that the dog minds wiping out. He loves the water and dog-paddles so well that Yew has trouble keeping up.

Bugsy wasn’t always so frisky. Two days after Yew, a doctor of emergency medicine, adopted the 12-week-old puppy from a shelter, Bugsy came down with kennel cough, which progressed to pneumonia. Yew rushed the pug to the ICU of a veterinary hospital, where he stayed until Yew could no longer afford to keep him there. Bugsy needed further treatment, so Yew built his own ICU in his apartment. He covered an empty fish tank with plastic to use it for nebulizer treatments and gave the ailing pup intravenous antibiotics. Bugsy pulled through.

Since then, the doc and dog have been inseparable. “Saving Bugsy’s life created unconditional trust between us,” Yew says. “He knows I’ll take care of him no matter what.”

That may be what fuels Bugsy’s spirit. The pair surf together every week and have shared other escapades, including skydiving. At Yew’s wedding to dentist Aimee Kim last year, a tuxedoed Bugsy carried the rings down the aisle tucked into a pillow on his back.

Bugsy and Yew have given up skydiving, at the bride’s insistence. But hang up the board? No way. Says Yew, “I want this dog to experience the same joy that I have in my life.”