Shamrocks, parades, pots-o’-gold, green beer — St. Patrick’s Day is a great way to welcome Spring and celebrate one of Ireland’s most celebrated saints.

But there are a few hazards all pet owners should keep in mind before heading out to their St. Paddy’s Day festivities — and we aren’t just talking about leprechauns. 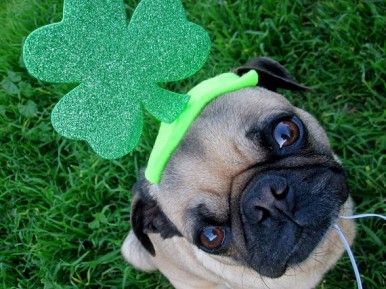 Cut Down on the Corned Beef

Sure, you and the rest of the fam might be saying, “Erin go Bragh!” over a heaping plate of corned beef and cabbage this St. Patrick’s Day, but your dog probably shouldn’t indulge in that same tasty meal..

Corned beef is essentially beef brisket that is soaked in a special salt and vinegar pickling brine before it’s cooked in a seasoned broth. Because of that special curing process, corned beef is extremely high in sodium. While a little bit of salt likely won’t harm Fido or Fluffy — depending on your dog’s or cat’s size and health history —eating too much salty food in one sitting can cause sodium ion poisoning in pets.

According to the Pet Poison Helpline, salt toxicity can be life threatening to dogs, cats, horses, cows, and birds. Eating too much salt may result in vomiting, diarrhea, lethargy, excessive thirst or urination, increased fluid retention, kidney damage, seizures, coma, or even death.

The broth used to cook corned beef also contains quite a bit of garlic, and many people cook the beef and cabbage with boiled onions. While those ingredients might infuse the meat with a lot of flavor, garlic and onions can be poisonous to dogs and cats.

Garlic, onions, chives, and leeks are members of the Allium plant family, which, if ingested by a dog or a cat and in a high enough amount, can cause nausea, abdominal pain, vomiting, diarrhea, lethargy, and an elevated heart rate and respiratory rate. Cats and Japanese breeds of dogs (such as the Shiba Inu and Akita) are especially sensitive to garlic and onion toxicity.

Finally, corned beef is quite high in fat compared what your pet is likely used to eating, so sharing your St. Paddy’s Day dinner with your four-legged friend could give him some serious stomach issues. Foods high in fat can cause bacterial overgrowth in your pet’s digestive system, which often results in diarrhea and vomiting. But frequent feeding of fatty foods like corned beef can also cause a more serious condition called pancreatitis, a mild to severe swelling of the pancreas. Pets suffering from pancreatitis often require hospitalization and long-term medication and diet restrictions.

Soda bread is a common St. Patrick’s Day treat for humans, but keep that mouthwatering loaf away from Fido and Fluffy today.

If you’ve decided to spend your St. Paddy’s Day baking your own tasty soda bread in the kitchen instead of hunting for four-leaf clovers in your backyard, make sure you keep that uncooked bread dough out of your dog’s or cat’s reach.

When a pet eats bread dough, the dough doesn’t just sit there in the animal’s stomach — it expands. As the ball of eaten dough gets bigger and bigger, it can result in a bloated stomach or even a life-threatening condition called gastric-dilatation volvulus (GDV), where the pet’s stomach twists and cuts off blood supply to vital organs.

A loaf of soda bread also contains raisins or dried currants, which are poisonous to dogs and in some reports cats and even ferrets. Eating even a few of these varieties of dried grapes has the potential to cause vomiting, diarrhea, loss of appetite, dehydration, and, in the worst cases of toxicity, acute renal failure. 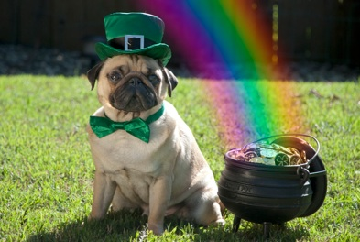 And finally, do not let Fido gulp down your Guinness — or any alcohol, for that matter

St. Patrick’s Day revelers are often in high-spirits — thanks at least in part to spirits of another kind. Alcohol consumption and St. Paddy’s Day go hand-in-hand for many people, but, pets and booze do not mix.

Pets who swill the same whiskey, beer, and other alcoholic beverages their owners might this St. Paddy’s Day are at risk of some serious health issues, and may even die as a result of consuming alcohol.

Hops, one of the main ingredients in beer, can prove toxic to dogs and cats alike. Ingesting enough hops can cause elevated body temperature, a racing heartbeat, vomiting, increased respiratory rate, abnormal blood clotting, and in the most severe cases, even death. While any breed of dog can fall victim to hops poisoning, breeds that are more susceptible to malignant hyperthermia — including Greyhounds, Border Collies, English Springer Spaniels, and other breeds — are especially vulnerable.

While some sources recommend feeding your dog Guinness to treat and prevent heartworm, this unconventional method should never be used unless prescribed by and monitored by a licensed veterinarian.